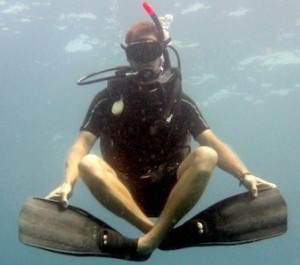 Introductions first, as they say. Meet me, Mike Lenzen, a 29 year old unemployed Canadian boy who has the pleasure of travelling the world with my wife, Ashley. We’ve been honing our photography and writing skills, while keeping in touch with our friends and family through our travel blog. Together we’ve seen and done some wonderful things. To give you a taste, we’ve climbed four volcanoes, seen seven world heritage sights, spent five weeks learning Spanish, and logged over 100 dives in Utila, Honduras where we lived and dove for three months. I absolutely love diving!

Please keep reading! It’s probably about here that you’ve decided to toss this entry aside. I know that if I were in your shoes, I’d be thinking, “Gee, this Mike fellow sure has a nice life. This prize should go to someone a bit less fortunate. Someone who’s going to appreciate it.” But, I’d be wrong.

The truth of the matter is that I’m just seven months ahead of this competition. You see, I’ve already begun to change my life, and it wasn’t because I won the lottery or had a rich family. I had to do it the old fashioned way – working hard and saving up as much as I could. It took seven years behind a desk, but eventually I was able to quit my job and sell our house, our car, and pretty much everything else that doesn’t fit in my backpack.

Just eight months ago this introduction would have looked more like this… Meet Mike Lenzen. An overweight 28 year old engineer. He’s a flat-lander from the prairie province of Saskatchewan. For those not familiar, Saskatchewan is a land so flat, you can watch your dog run away for three days. There’s more truth in that than you would think. Southern Saskatchewan has no mountains, not much for trees, and basically no lakes worth diving in. That means no hiking, canoeing, or diving without driving in one direction for 8 hours, and another 8 hour drive back.

So instead, I spent my time working at a desk, staring at a computer screen, answering phones, and getting fat. It was not a bad job, as far as jobs go, but with the ridiculously low number of annual holidays us North Americans settle for, I wasn’t doing the things I liked and I wasn’t very happy.

I know that I love diving, I love my new life and I want to become a diving instructor. I’ve been out of the office for the past seven months, and it suits me. I love the sun, the mountains, the lakes, and the oceans. As much as I miss my friends and family back home, I know I can never live there again. You can help make my new life permanent. Give me the chance to become a SCUBA instructor, and I’ll do it until the day I die. And I’ll die happy.